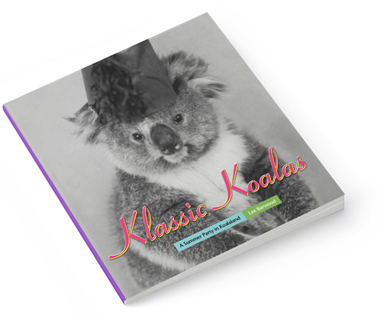 San Mateo, Calif.—November 9, 2009—Koala Jo Publishing today released its two newest titles,KLASSIC KOALAS: A SUMMER PARTY IN KOALALAND, by award-winning author Lee Barwood, and the Klassic Koalas Coloring Book. Filled with vintage photos of native Australian wildlife set against colorful backdrops, the former tells a sweet tale of celebration as a young koala, or joey, comes out of his mother’s pouch for the first time. The second offers youngsters and adults alike the opportunity to exercise their creativity as they learn about native Australian wildlife—from colorful birds to shy bilbys.

In A Summer Party, in the Long-Ago, “a gentle period long after the Dreamtime yet before the modern world,” little Dorak, a baby koala, emerges from his mother’s pouch to survey the world around him. His excitement is contagious, and other babies—including a tiny wombat and a wallaby—venture out to explore. The atmosphere is festive, and when another young koala suggests a party, everyone is eager to come. Other animals young and old, including a wombat, an albino possum, kangaroos, a dingo, a group of emu chicks, and even an albino koala, come to celebrate Dorak’s first day exploring the outside. Then the animals gather to hear Kaleny, a venerable old koala, tell tales of the Dreamtime; as the old-timers remember the Time Before Time, even humans are welcome at their celebration.

Designed to evoke the atmosphere of a summer picnic, the book’s black-and-white photos are framed by colorful backgrounds chosen from vintage summer tablecloth patterns. The story is told through a succession of carefully chosen shots of beautiful Australian animals, captured in an array of winning poses, and simple words suitable for children but evocative of so much more. The book also serves as an entree to some of the tales of the Dreamtime, the ancient native Aboriginal lore that explained how the world and its creatures came to be. Each animal’s name, taken from one or another of the Aboriginal languages, appears in a glossary in the back, with its meaning.

In KLASSIC KOALAS: A COLORING BOOK OF MORE THAN 80 KOALAS AND UNIQUELY AUSTRALIAN CREATURES, images of birds and animals—both warm-blooded and reptilian—offer all generations the opportunity to give their imaginations free rein by not only using color to bring the pictures to life, but in adapting their use as patterns for crafts such as stained glass, quilts, woodworking, or needlework. The array of images available includes some of the stunning creations featured in Klassic Koalas: Ancient Aboriginal Tales in New Retellings, as well as new pieces depicting all sorts of Australian wildlife—from its rainbow-hued birds to its unique mammals, found nowhere else on Earth. Those wanting to learn more about the animals themselves will find a glossary in the back to better acquaint them with these rare and, in some cases, endangered or already extinct creatures. The diversity of the book’s images is a reminder of the diversity of animal life not just in Australia, but across the world, and offers not just fun but an opportunity for learning as the animals take color and perhaps three-dimensional form under their artists’ fingers.

Look for other Koala Jo Publishing releases soon, including:

About the Author: Storyteller Lee Barwood has been writing fantasy, environmental fiction, and mystery for over thirty years. Her stories and poetry have appeared in numerous magazines and anthologies, including Ellery Queen_s Mystery Magazine, Futures Mystery Anthology Magazine, Catfantastic III and V, and Horsefantastic; her environmental novel A Dream of Drowned Hollow won Andre Norton’s Gryphon Award. She has also worked as a magazine and newspaper editor, technical writer, and book and music reviewer.

About the Artist: Publisher Joanne Ehrich is a gifted graphic artist with numerous projects to her credit in a variety of fields. Her previous books include Koalas: Moving Portraits of Serenity, Koalas: Zen in Fur, Klassic Koalas: Vegetarian Delights Too Cute to Eat, and other titles.

« Meditative bliss with the most Zen-like creatures alive » An artist’s journey of creation: Klassic Koalas: The Book of Valentines